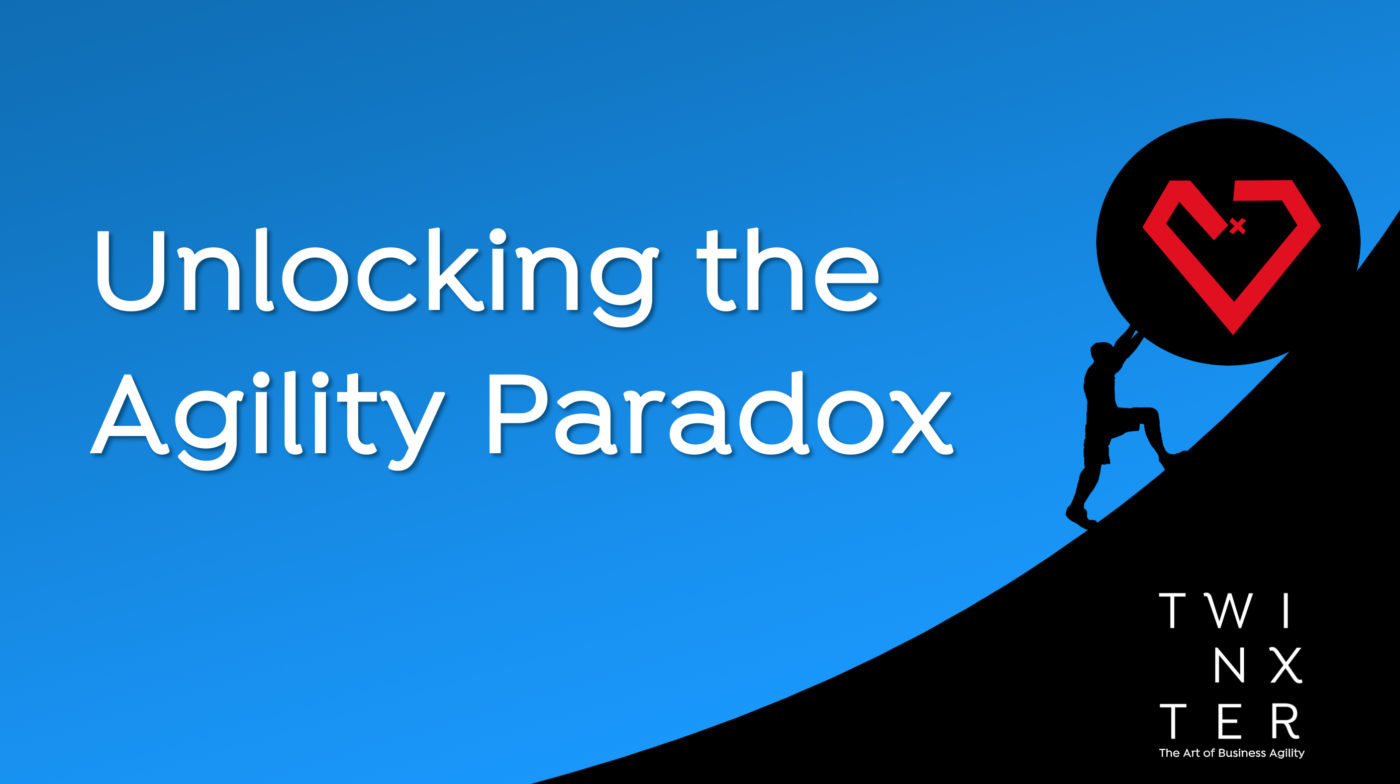 During any transition towards Business Agility, questions and comments arise from various teams, who all find themselves in different phases of the change. Managers and workers experience all kinds of difficulties in their work and collaborative practices. Teams become less effective, and discontent grows, while you would expect the new way of working to eliminate constraints and improve collaboration, and thus boost employee engagement. This is also known as the Agility Paradox.

The transition towards an agile organisation ironically also creates new constraints. In practice, organisations that decide to change their traditional methods and move to a more agile way of working do often not shift the whole organisation at once. Those employees who are the first to work on a self-organising team are also the first to face processes that have not yet been adapted to the new way of working. They are also the ones who are held back by organisational units that still operate in the traditional way.

It is no surprise that they experience constraints during this transitional period. We humans come from an age of the carrot-and-stick approach. According to a traditional theory on motivation, developed around 1800 by Jeremy Bentham, an English philosopher, people are motivated by things such as money or a promotion, while punishment also helps prompt employees to adopt the desired behaviour. Fabiola Eyholzer, co-founder, and CEO of Just Leading Solutions, calls it the ‘Douglas Effect’.

Most HR processes were defined based on worst-case scenarios and the worst possible employees you can imagine. Douglas is the personification of all kinds of bad behaviour and character traits. Our processes were designed with one thing in mind: to keep Douglas in check. This way of working generalises and is based on distrust and control.

At agile organisations, the context changes. Teams make planning arrangements together, which involves giving each other feedback and evaluating each other’s performance. This creates full transparency across all levels of how a team works and who does what. New workplace relationships at agile organisations reveal countless obstructing processes.

So, what to do with the constraints we encounter? Eliminate them! While this is easier said than done, it is essentially the only thing you can do when you, as an organisation and as a human being, want to achieve your goals and pursue your purpose. Constraints blocks progress and have a demotivating effect. It stops you and your organisation from developing and making progress. The only remedy is to identify those constraints and do something about them.

What happens when you do not overcome a constraint? Most of the time, employees are creative, and they find ways to cut corners. If you leave a constraint be, employees will try to find ways around it themselves and solve it by, for example, doing things their own way in a shadow process. So called elephant paths are a classic example of this phenomenon. These paths are formed organically and offer an alternative route away from the officially designed or created paths. The official path, i.e. the red tape in a company or a physical cycling path in a city, continues to exist and will be used, but people who have to get something approved quickly or cyclists who want to take a shortcut, will create tangible or intangible elephant paths.

Tips to help you move forward

In the corridor or coffee-corner of your company, you can often pick up chatter about things that are not going well. The question is how to make such discussions, challenges, and constraints transparent, and bring them all out in the open. After all, there are truths to be found in all this information that you not only want to make visible, but also want to resolve.

These tips will help you and your organisation during your journey towards Business Agility with how to start having a transparent dialogue, engage employees in the discussions on how to get rid of constraints and quickly improve on overall company and/or departmental performance.

How do you face the current and future constraints in your organisation?

Is your organization prepared for the future that’s coming? Let’s take the first step towards a lasting transformation together.